RSS
← The Future of Reading: The Coming of the Inevitable
The MAD & The BAD: Today’s Dose of Entertainment →

The MAD & The BAD: Today’s Dose of Entertainment

After yesterday’s Post, one thing must be clear and that is that Monday’s genre of picks is decided. Crime movies for The MAD & Speculative Fiction (ok, Science Fiction) for The BAD. All picks will be updated at the dedicated page. Let us go ahead with today’s picks, shall we?

Big Fish: A Movie as Big as Life Itself!

Big Fish tells the story of Edward Bloom (Albert Finney). Edward is the epitome of the charismatic southern gentleman. He is charming, friendly, and the best teller of tall tales on the planet. In fact, it is through these tall tales that the story of Edward’s life unfolds. As he lies in bed, dying of cancer, he takes his son, and us, on a journey through the many experiences in his life. Whether they are real or imagined is up to you to decide.

Edward’s son William (Billy Crudup) grew up loving his father’s stories, but has grown to feel like Edward has never really given him the truth. The fanciful tales have become nothing more than lies, and as Edward nears the end of his life, William just wants to know his father for who he is and without all of the whimsical underpinnings. And as he sets off to discover his father’s true story, what will he find out…

“Big Fish turns into a wide-eyed Southern Gothic picaresque in which each lunatic twist of a development is more enchanting than the last,”  — Owen Gleiberman of Entertainment Weekly

“It’s like Forrest Gump without the bogus theme-park politics.”

“Big Fish is a clever, smart fantasy that targets the child inside every adult,” Berardinelli said, “without insulting the intelligence of either.” — James Berardinelli

“As you’ve seen as you scrolled down to read this review, I have given Tim Burton’s new film the highest rating of any film I have reviewed on this site to date. And, there’s only one reason for that…

I am absolutely in love with Tim Burton’s Big Fish. I love the restrained, but vintage “Tim Burton look” of the film. I love the way Steve Buscemi just seems to own any part he plays. I love Albert Finney. And to top it all off, I love, love, love Ewan McGregor in this film. He emits charisma like no other young actor working today, and by the time it’s over you’ll feel like you want to know him forever. He becomes the kind of character you want to have over for dinner and just listen to for hours and hours.” — Richard Dennis

Why You should Watch it:

Why I loved it: 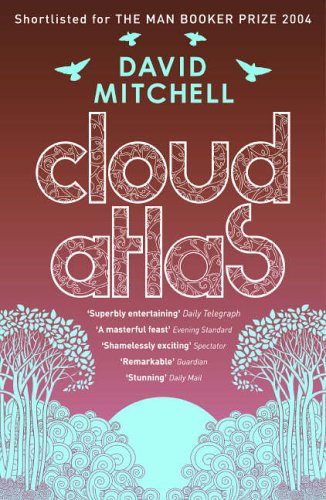 Cloud Atlas – Another “Big” pick for you!

Cloud Atlas is made up of half-a-dozen disparate but artfully interwoven narratives that propel the reader forwards through time and genre, from the distant nineteenth to the not-so-far-off twenty-second century, from giddy picaresque to cool thriller to chilling sci-fi.

Cloud Atlas tells six different narratives, told in parts and out of order at times, constructing a novel with their intersections and coincidences. Each story is at first partially told. It begins with an American notary’s journals during a South Seas voyage, This follows with a story in 1931 of an English cad working as an amanuensis for a blind, syphilitic composer. It jumps to reporter in the 1970s investigating a cover up at a nuclear reactor, then a futuristic fast food robot struggling to achieve sentience, and finally a Hawaiian ruminating on a post-apocalyptic life. Then the unfinished stories are completed in backwards order. David Mitchell’s novel explores the intersection of history and humanity as they echo through time.

David Mitchell’s new novel, “Cloud Atlas,” is a remarkable achievement, a frightening, beautiful, funny, wildly inventive, elaborately conceived tour de force. It places us not in one intensely imagined world but six: six different time periods, milieus, vocabularies and literary styles. Each of these tales more than earns its keep. Collectively, they constitute a work of art. There’s a motorcycle stuntman quality to Mitchell.

“It is a devious writer indeed who writes in such a way that the critic who finds himself unresponsive to the writer’s vision feels like a philistine. So let it be said that Mitchell is, clearly, a genius. He writes as though at the helm of some perpetual dream machine, can evidently do anything, and his ambition is written in magma across this novel’s every page.”  — New York Times

“To write a novel that resembles no other is a task that few writers ever feel prepared to essay. David Mitchell has written such a novel — or almost has. It its need to render every kind of human experience, ”Cloud Atlas” finds itself staring into the reflective waters of Joyce’s ”Ulysses.””– Tom Bissel

“David Mitchell’s new novel, “Cloud Atlas,” is a remarkable achievement, a frightening, beautiful, funny, wildly inventive, elaborately conceived tour de force. It places us not in one intensely imagined world but six: six different time periods, milieus, vocabularies and literary styles. Each of these tales more than earns its keep. Collectively, they constitute a work of art. There’s a motorcycle stuntman quality to Mitchell.” — SFGate.com

Was shortlisted for Booker Prize, Hugo and Nebula Awards

Why You should Read it:

Why I loved it:

Should you read Cloud Atlas? If you appreciate literary fiction, then this is a novel you should read at least once. Maybe more. It will challenge you, intimidate you, frustrate you, and dare you to think about the important questions it raises. It may not, however, grab you and pull you along with its storylines. That doesn’t necessarily detract from its importance or its brilliance. David Mitchell may be more intelligent than the rest of us, and he has some interesting and important ideas he wants to explore with his readers. Read Cloud Atlas.

That is it for today folks! See you tomorrow! Hope you enjoy the picks!

PS. For readers from inside campus, a small bonus package is provided! The movie and the book can be lent from me personally from my username at DC++, please understand that I am only lending you the copy and you are advised to delete the copy of the movie/book after usage. The details will be updated along with the posts.

Disclaimer: This blog does not support the propagation of pirated material in any way and the books and movies are to be lent on a personal basis only. [ Just in case 🙂 ]

Posted by Riku on February 17, 2011 in Books, Movie Discussions, Movies

← The Future of Reading: The Coming of the Inevitable
The MAD & The BAD: Today’s Dose of Entertainment →

4 responses to “The MAD & The BAD: Today’s Dose of Entertainment”